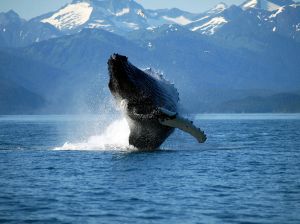 This blog was first published at http://nofunnybusiness.net/2014/04/killing-whales-is-bad-science-lessons-from-the-international-court-of-justice-ruling-against-jarpaii/

I love whales. So I was thrilled when the ICJ ruled against Japan’s controversial whaling program in the Southern Pacific Ocean. But what are this case’s lessons for scientists?

Catching whales for food and other products is traditional in many cultures, including Japan. But over the last century, human population growth and modern fishing methods loaded the odds against the cetaceans. The International Whaling Commission (IWC) was established in 1946 to prevent overhunting, provide for conservation of whale stocks and the orderly development of the whaling industry.

To achieve its objectives, the IWC sets catch limits for whaling, and in 1985/86, it established a moratorium on whaling that is still in place today. Since the moratorium, 22,721 whales have been caught commercially by countries objecting to the moratorium, 9,393 have been caught for Aboriginal subsistence harvest and 15,563 have been caught under special scientific permits. Of the latter 14,643 were caught by Japan under scientific programs called JARPA and JARPAII. 10,476, or 22% of the total whale catch, have been Southern Pacific. This whaling was the focus of the recent court case.

Australia claimed that Japan’s annual Southern Pacific hunt was not “for the purposes of scientific research”. It argued that scientific research needs defined and achievable objectives, to use appropriate methods, be properly peer reviewed and avoid adverse impacts on the stocks being studied. Lets have a look at some of these claims.

The research objectives, clearly and reasonably stated in the latest JARPAII Research Planare monitoring of:

With regard to the methods, these take up most of the JARPAII Plan, but just two short paragraphs justify the killing of 14,643 whales for science. The reasoning is that age and stomach content surveys are essential for meeting the objectives because “meal size, blubber thickness and age at physical and sexual maturity strongly suggested inter and intra species competitions” (p.20). Therefore lethal sampling is necessary. This makes little sense to me, and I note that other cetacean research projects use alternative, non-lethal methods to gain research results consistent with the JARPAII objectives.

JARPAII researchers have ticked the box of peer reviewed publications based on their lethal research. One example is a paper reporting a 30% decline in Antarctic minke whale stomach contents by weight over 20 years, and suggesting that reduced krill abundance may be to blame. This longitudinal study would indeed have been difficult using the more common non-lethal method of post-mortems on beached whales. But to me it seems unnecessary to kill whales to learn about krill decline when this phenomenon and its implications are well established by other research.

Perhaps the lesson here for scientists is that if you do controversial research, you had better do it well, or risk international outrage and potential legal action.

But the IWC was not convinced by Australia’s case for JARPAII being unscientific on the basis of its objectives, methods and publications. And Japan for its part, argued that the court had no authority to decide what was and wasn’t science. Instead, the court focused on the lack of feasibility studies into a smaller lethal intake and an increase in non-lethal sampling to achieve its objectives. And indeed, this is a significant gap in the JARPAII research plan, since the potential for stock loss is not addressed in its discussion of sample sizes.

The ICJ has not insisted on strong ecological ethics in its ruling, just that non-harm be clearly considered. And just one day after the ruling, Japan has flagged that it may devise a more persuasive research program requiring whale killing. But let’s at least note the wake-up call for scientists to fully justify ecological research with dubious ethics.

What did you learn from this case?